Musical Director of our Choir

Started his musical career as the youngest double bass player in the National Youth Orchestra of Great Britain. Whilst at school he was a founder member of the group that went on to become the 70’s cult band, Mott the Hoople. He gained a scholarship to the Royal College of Music where he studied singing with Mark Raphael, double bass with Eugene Cruft and conducting with Sir Adrian Boult. Since leaving the RCM John’s eclectic love of music has taken him throughout UK and Europe, performing with a huge variety of musicians from Pierre Boulez to the Walker Brothers; and in an enormous number of venues from Ronnie Scott’s to the back of a lorry in a carnival in Alicante, to the Royal Festival Hall and the Proms at the Royal Albert Hall!

He has conducted choirs and orchestras since the early 70’s. During this time he was also proud to be Principal Guest Conductor of the Prague Academy Orchestra for several years. He recently retired from his two choral societies in South West London and now concentrates on free-lance bass-playing and conducting Compton and Shawford Festival Choir.

He takes a leading role in the planning and organising of the three or four concerts they perform each year, and since 1984 his choirs have combined for an annual summer tour in which the venues have included many Cathedrals and Basilicas in France, most memorably Reims, Sacre-Coeur (Paris), Vezelay, Foix, Bourges, Sancerre and Toulouse.

Recent comments on his performances have included “truly inspirational” “awesome”, “masterful”, ”great fun”, “most moving”—all of which he enjoys enormously!

For over 40 years he has brought pleasure through music to many thousands of people as a performer, conductor and teacher, with the philosophy that music can be a medium through which communities at large can benefit. John has helped to raise many tens of thousands of pounds for worthy causes and promote British music abroad, including compositions by Archer, Britten, Jenkins, Rutter and Tippett. He is also the Musical Director of the Voices for Hospices Choir and Sinfonia which, amongst others, perform a major concert biennially on World Palliative Care Day. The latest was held in Winchester Cathedral on the 12th October 2019 when the VfHChoir raised over £21,000 for Hampshire Hospices.

Nowadays when not engaged in music he can be found either on his electric bike, the golf course, or at his home in France! 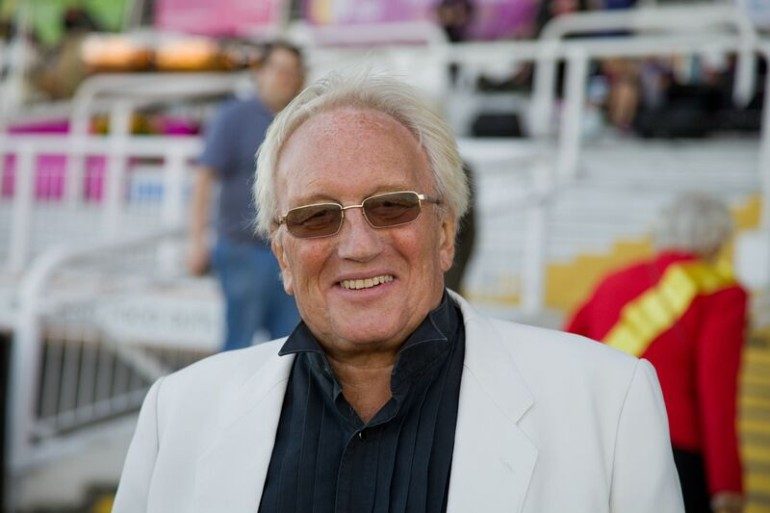 …and with our accompanist Gwilym Stacey John at the end of conducting the massed performance of The Armed Man at Kempton Park. Our choir sang together with many London based choirs John is congratulated by Sir Karl Jenkins – composer of The Armed Man. The event raised around £25,000 for Voices for Hospices.